The citizen protests in Iran, in which the participation of many women against the Ayatollahs’ regime stands out, not only do not stop in the Persian country, but also expand beyond its borders. The demonstrations that run through the cities of the 31 Iranian regions have been joined by marches in Turkey, Iraq, the US, Germany, Greece – where they have thrown Molotov cocktails at the Iranian embassy -, or France. “I would like to be in my country. Since I can’t, I demonstrate here, in Paris”, says Mariam, a 45-year-old Iranian, who has lived in Europe since 2019. In the French capital there have been calls both on Saturday and this Sunday. As a sign of the growing concern that these movements are causing in the regime, the Iranian Foreign Ministry has summoned the British, Norwegian and Swedish ambassadors to show their “dissatisfaction” with the attitude of those countries in the face of the protests, which started more than a week following the death, on September 16 and in police custody, of the young Mahsa Amini, 22, arrested for wearing the veil in an “inappropriate” way, according to the ayatollahs’ morality police.

According to the Fars agency, a news agency controlled by the Islamic Revolutionary Guards, the British ambassador, Simon Shercliff, was summoned on Saturday to explain the “hostile nature” of Iranian media opposed to the regime and based in London, such as the channel Iran International television. In the case of Norway, where the NGO Iran Human Rights has its headquarters, in Oslo, it was the words of support for the protests expressed by the president of the Norwegian Parliament, Masud Gharahkhani, of Iranian origin. Some “harmful and implausible” statements, according to an Iranian foreign statement released by Fars, and which it considers “interference in Iran’s affairs.” 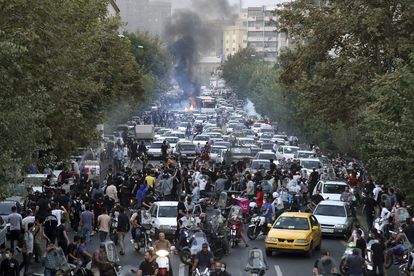 Demonstration in the center of Tehran last Wednesday.AP

“The regime did not expect this move,” says Farhsad, 40, from Tehran in an audio message. He then launches a warning: “Do not reveal the platform we are using.” As the days go by, and given the continuity of the protests, the regime has intensified its repression, with special emphasis on the north, in the area of ​​Iranian Kurdistan; where Mahsa Amini was originally from, from the town of Saqqez. The official media already recognize 41 deaths of protesters -although Iran Human Rights raises them to more than fifty (54)-, as well as more than a thousand detainees. The EU has described as “unacceptable” the “disproportionate” use of force by Tehran to repress the protests, Josep Borrell, head of community diplomacy, said this Sunday. On the other hand, the reformist daily Sharg, the most important in Iran, has denounced the arrest of the journalist of its head Nilufar Hamedi, the first to publish the death of Amini. She is not the only informant held: Reporters Without Borders has denounced the arrest of at least a dozen journalists.

#Niloufar_Hamidi The journalist of Shargh newspaper was arrested

Nilufar Hamedi, a journalist of social group #East newspaper He was arrested at his home this morning.

Mohammad Ali Kamfirouzi, the lawyer of Nilufar Hamedi, also said that he will follow up on the situation of his arrest.

Sharq will also follow the situation of its detained journalist. pic.twitter.com/Zo65vVXi9W

“There is fear. But people are not going to stop. We all know that regime change takes time. And there has not been an opportunity like this, ”explains another activist from Shiraz on WhatsApp. The protests in Iran start at sunset, around 6:30 p.m. (5:00 p.m. in mainland Spain). “We go out at night because, although we cover up, it is more difficult for them to recognize people’s faces,” Farshad continues from Tehran: “There are cameras everywhere: in banks, security, in the streets…”. “The protesters cannot be recognized. Not localized either,” she adds. She says that to avoid surveillance, many of them have captured the geolocation on their mobiles; others, directly, do not carry it with them when they go to protest. She also says that they only use a Wi-Fi connection and always with a VPN (a virtual private network that makes traceability and the application of so-called surveillance capitalism more complex).

“We don’t organize ourselves in any way, but we go to places where we know there are going to be other people. If we coordinated through social networks, the authorities would be the first to know. The control is getting more and more”, continues this activist who says that the marches usually end “between 1 and 2 in the morning”, Iranian time. The president of Iran, the ultra-conservative Ebrahim Raisi, has stressed his request for “firmness” towards the protesters, while the president of the judiciary, Gholamhossein Mohseni Ejei, has warned that there will be “no leniency”. The Government has also called counter-demonstrations this Sunday: “Death to the activists”, they demanded in response to the proclamations of the activists who ask for “death to the dictator [en referencia al líder supremo Jamenei]”. 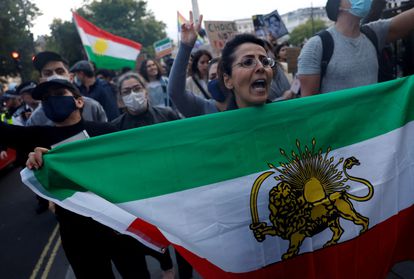 Demonstration in London against the ayatollahs, on September 24. CLODAGH KILCOYNE (Reuters)

“The involvement of the United States in Iranian affairs, and its support for the revolts, collides with Washington’s diplomatic rhetoric, with its messages towards the nuclear pact with Iran, as well as with stability in the region,” he said this Sunday. the foreign minister of the Persian country, Hossein Amir Abdollahian, according to the ISNA agency, semi-independent and directed by Iranian university students. Abdollahian refers to the US declarations of trying to provide digital coverage to the country in the face of the blackout carried out by the Government of Tehran, which cuts the network at night, in addition to slowing it down at other times of the day and controlling part of the communications.

The fear of surveillance by the Iranian regime also crosses borders. “In the Paris demonstration, some of us also covered our faces with sunglasses, masks or scarves,” Mariam resumes. “The mujahideen, the fundamentalists or those related to the regime take photos of the protests in other countries and send them to the secret services, which can visit your family, if they are in Iran,” he explains, “they can also keep information and when we visit our country they put us in trouble or detain us”.