An excess of liquidity in the system of 4.6 trillion with which the ECB still does not dare 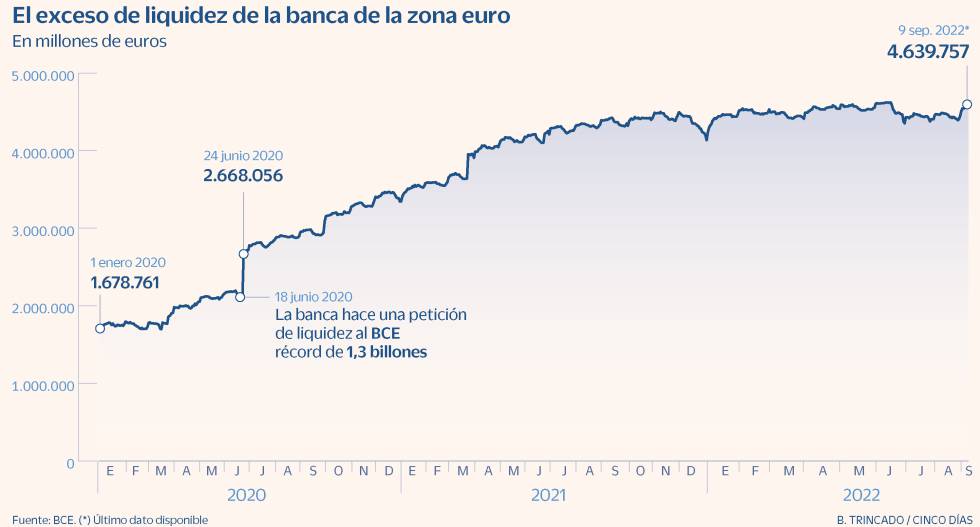 The bank continued yesterday to prolong the gains on the stock market with which it has received the rate hike of 75 basis points decided on Thursday by the ECB and the forecast of new hikes in the coming months. The opportunity to raise its business margins is now clearly opening up for the sector, at a higher rate than expected, as shown by the rise in the Euribor.

But the ECB’s decisions at the last meeting have also left other good news for banks. After almost ten years of negative rates –the deposit facility fell to -0.1% in 2013 and -0.5% in 2019–, the ECB is going to remunerate all the money that entities park in the deposit facility and will do so at 0.75% starting this Wednesday. At the same time, it has not modified the conditions of the TLTRO III liquidity injections activated with the pandemic, for which it gave the sector a 1% bonus for borrowing money from the central bank in order to give credit.

Thus, financial entities find themselves with the best of all worlds for their excess liquidity: what is captured at -1% can be paid at 0.75%. An incentive to amass excess reserves that in no way contributes to entities competing by paying more for customer savings.

As pointed out by Scope, banks “now have very few incentives to return this TLTRO financing in advance, before June 2023, which is when the largest maturities are concentrated”, 55% of the total. According to Frederick Ducrozet, an analyst at Pictet, the remuneration of 0.75% of bank deposits in the ECB “makes it easier for entities to obtain the maximum benefit” from that excess liquidity.

European banks hoard financing in the ECB’s TLTRO lines for 2.1 trillion euros, of which a large part could go to the deposit facility, leaving a possibility of arbitration on which Christine Lagarde has not decided to act, but yes it could do it later, according to they warn from Citi. “This benefit could last only for a limited period of time, given the risk that it may be subject to review,” says the US bank.

For Jefferies, “doubts about the remuneration of excess liquidity have not completely disappeared”. “Christine Lagarde has indicated that the general review of liquidity conditions and the remuneration of bank reserves may come in due course, so it is not clear that these current favorable conditions for banks will prevail forever”, adds Frederick Ducrozet .

For the time being, the ECB has given no signs of how to reduce the excess liquidity accumulated by the financial system, to a record figure of 4.63 trillion euros. It is the amount that banks have left over once they have met the minimum reserves with which to ensure the availability of cash to their clients. For Scope, “the ECB has a solid political justification to encourage banks to maintain excess liquidity while the eurozone economy enters a difficult winter. This can suppose an additional demand of financing for the banks”. From Afi, its analyst Javier Pino agrees that “excess liquidity is a safeguard, a support against the slowdown in the economy.”

In any case, according to Elena Iparraguirre, a banking analyst at S&P, the liquidity accumulated in the ECB’s deposit facility should decrease rather than grow, despite the new incentive. “There are €1.5 trillion of TLTRO maturities in 2023. The banks will use some of the cash they have in the deposit facility to pay the TLTRO maturities. That will contribute to somewhat reduce the available liquidity”, she concludes.

Alcaraz returns to play the Davis Cup: "I really want to wear the Spain shirt!"