AMD will present combination processors with new CPU cores and a new GPU in 2023: Phoenix Point – or Phoenix for short – is the name of the next generation, which will come into notebooks as the Ryzen 7000U and Ryzen 7000H. It combines a Zen 4 CPU with a modern RDNA3 graphics unit, as AMD confirmed at Financial Analyst Day.

The RDNA2 GPU in the current Ryzen 6000U/H (Rembrandt) will not meet the same fate as the youngest offshoot of the GCN architecture aka Vega, which sat in all AMD combination processors for three years, from the Ryzen 2000U/H -Generation up to the Ryzen 5000U/H of 2021.

AMD has the Phoenix processors produced by the chip order manufacturer TSMC with 4-nanometer structures. In terms of production, they have a small advantage compared to the desktop Ryzen 7000, since the latter still use the slightly poorer 5 nm process. TSMC refers to the N4 process as an improved N5 version, but not as a full generation leap.

AMD did not mention one exception at its own Financial Analyst Day: Ryzen 7000HX aka Dragon Range for high-end notebooks. The processor series uses different chips than the little brothers, possibly mobile offshoots of the desktop CPUs Raphael with many Zen 4 cores and mini RDNA2 GPU.

RDNA3 will remain the measure of all things in combination processors for at least two years: The Zen 5 generation Strix Point – presumably in the form of Ryzen 8000U and Ryzen 8000H – gets an improved version that AMD calls RDNA3+, but suspends the change to RDNA4 . Meanwhile, the desktop models with Zen 5 technology are called Granite Ridge.

AMD hasn’t yet been pinned down to one manufacturing process for Strix Point and Granite Ridge. In general, the company wants to use 4 and 3 nm technology from TSMC for the Zen 5 generation. 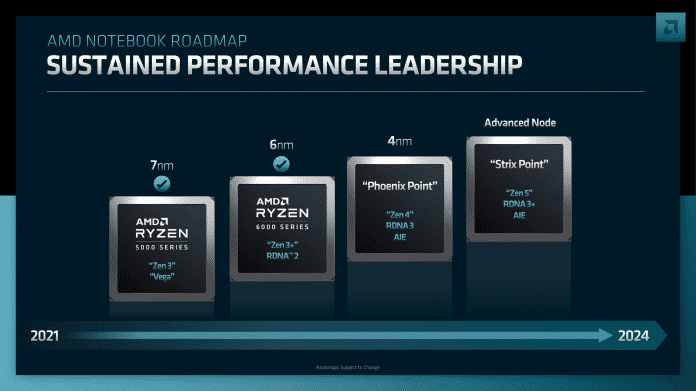 For notebooks, Phoenix Point and Strix Point are on the agenda for the next two years. Both generations use an RDNA3-based GPU.
(Image: AMD)

Starting with the 7000 generation, AMD has installed an AI engine in its notebook processors, called AIE, which comes from the purchased company Xilinx. These cores already run trained AI networks (inference), although AMD has not yet mentioned an application for the AI ​​engines in notebooks.

It also remains unclear whether Phoenix Point will still use a monolithic die like its predecessors. With the RDNA3 graphics architecture, AMD focuses on a division into different chiplets, and the company also emphasizes the possibility of being able to dock Xilinx logic blocks via chiplets with server processors. A chiplet structure could therefore not be ruled out in the future for notebooks either.