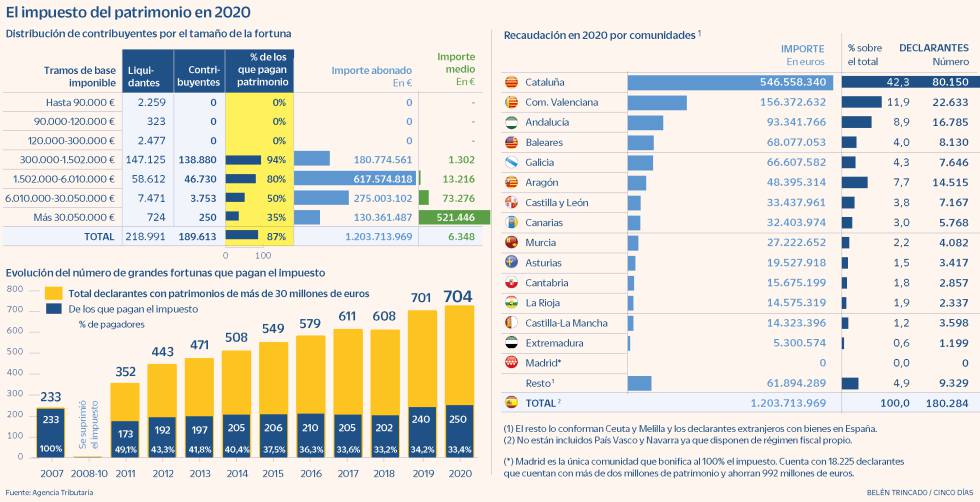 Of the 724 taxpayers in Spain who declared a fortune of more than 30 million euros in 2020, only 250, 34.4% of the total, paid wealth tax. In turn, of the 7,421 citizens who declared they had between 6 and 30 million, the immediately previous section, only 3,753 (just over 50%) settled the tax. Broadly speaking, these 250 and 3,753 taxpayers paid the tax in question for residing in a region other than Madrid, the only Spanish autonomy that today subsidizes 100%, and therefore suspends, the tax levied on large fortunes . In other words, almost 500 wealthy people with more than 30 million euros and some 3,700 taxpayers with between 6 and 30 million saved the tax thanks to their tax residence.

This tax, whose management falls directly on the autonomous communities, affects taxpayers who own assets worth more than 700,000 euros, excluding the habitual residence up to 300,000 euros. The tribute has been and continues to be the subject of great controversy, both at regional and national level. On the one hand, several regions accuse Madrid of carrying out unfair tax competition by reducing the tax to 100% and attracting large fortunes to their jurisdiction with this measure. For its part, despite having put the tax reform on hold until further notice, the central government has been in favor of harmonizing the tax to end the territorial gap and stop the flight of income for fiscal reasons.

In the Community of Madrid there are some 19,000 people who have had to declare their assets, adding the set of tax bases. In fact, according to the statistics of the Tax Agency itself, the central region stopped collecting some 990 million euros for this tax, since although the wealthiest taxpayers had to file the declaration, they were exempt from having to pay thanks to the tax advantage that gives them residency.

On the other side, Catalonia could be found and, at a further distance, the Valencian Community and Andalusia, which in this order are the three autonomies that enter the most. Catalonia, specifically, collected some 546 million thanks to more than 80,000 taxpayers subject to the tax. The Valencian Community and Andalusia entered respectively 156 and 93 million of the declarations of 20,000 and 15,000 citizens. From here, the collection moves between a range of 68 million in Galicia and five million in Extremadura. The data for the Basque Country and Navarra, meanwhile, are not available because they have their own tax regimes.

According to statistics, the number of taxpayers with a declared wealth of more than 700,000 euros increased by 3% in 2020 compared to 2019, a year in which these citizens increased their average wealth by almost 2% despite the impact of the health crisis. In total, the number of filers was 218,991, some 6,000 more than in the 2019 financial year.

The number of liquidators of more than 30 million euros has been growing year after year since the 233 who declared for Patrimony in 2007. The Patrimony tax was abolished by the Government of José Luis Rodríguez Zapatero in 2008, when it was reduced to 100% in all Spain. Three years later, and due to the ravages of the economic crisis, it was recovered by the same Executive and extended by the respective Governments of Mariano Rajoy and Pedro Sánchez.

Ben Stiller and Sean Penn can no longer enter Russia