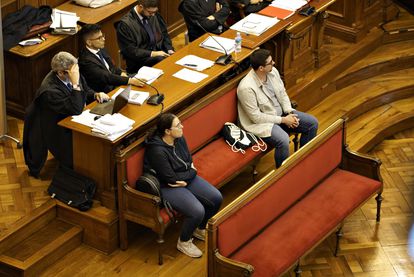 Alba Andreu and Ismael Molina, on the bench of the accused. Gianluca Battista

Alba Andreu, 22, is risking her future and her freedom. She has to convince the popular jury that she did not manipulate her friend Isma into killing her father, that she is incapable of doing it. And he must propose, with conviction, an alternative theory that explains why a boy without apparent family conflicts like Ismael Molina ended up stabbing his father Manuel to death, in the family apartment, on June 8, 2019. Alba’s defense, who expresses himself clearly and only on a couple of occasions breaks into tears, unfolds as an attack on several fronts that leaves collateral victims in its wake: he points to an ex-boyfriend as the creator of the fantasy that ended up tricking Isma and casts shadows of doubt about the relationship between the young man and the deceased father.

Isma’s gaze, the perpetrator of the crime, remains intensely fixed on Alba throughout the statement. The girl explains that they became “brothers” after meeting in the spring of 2018, when she started dating Arnau, a close friend of his. They were soon joined by shared confidences, their “self-esteem problems” and their “physical complexes”. Arnau, with whom she broke up a year later, a few months before the crime, has become this Thursday, in the second session of the trial for the parricide of Vilanova i la Geltrú (Barcelona), the involuntary protagonist of the plot. Alba attributed to him the creation of a false secret group that collaborated with the Mossos and, also, the invention of a virtual girlfriend for Isma: Júlia. “It was all Arnau’s thing.”

The Prosecutor’s Office, which asks for more than 34 years in prison for Alba for inducing murder, considers that she created the character of Júlia to strengthen her ascendancy over Isma, whom she ended up isolating from her surroundings and majando at will with the sole objective of achieving money. In a few months, the girl managed to get him to give her about 7,500 euros in various transfers until, finally, Isma’s father, Manuel, decided to turn off her tap. Alba then convinced the young man that his father was part of a mafia organization and that the only way to protect him and his family was to kill him and pay a debt of 20,000 euros.

Alba, who was 19 years old when the crime was committed, has made an effort this Thursday to dismantle the thesis of the accusation. From the outset, she has presented herself as a bad student who needed an adapted curriculum to pass ESO. She too, as a vulnerable person, she embarked on a relationship with whom she ended up being an abuser: Arnau. “I’m still afraid of him, I’m looking around the street…” she says and covers her face with her hands while she lowers her head and sheds some tears. To questions from the prosecutor, Alba has admitted that she has never, not even now, denounced Arnau, whose testimony as a witness is scheduled for this Friday.

Júlia’s invention, he insisted, was Arnau’s thing, who wanted to raise his friend’s self-esteem. Alba lent herself to the game against his will, and always with the best intentions. “When he spoke like Júlia, he had typical couple conversations with Isma. He communicated some concern to me and I tried to encourage him”. The point is that she went ahead with the fantasy even when Arnau had disappeared from his life. Why didn’t he stop?, the popular jury wanted to know in a battery of questions to the accused. “Because it just snowballed bigger and bigger, one lie after another, and it just slipped out of my hands.” That “ball” included the request to Isma for a bottle of sperm with which, following this delirium, Júlia became pregnant with twins.

Alba’s defense also involves casting shadows of doubt on Isma’s motive. According to the Prosecutor’s Office, the young man, who was 21 years old at the time, stabbed his father at the express indication of Alba, who encouraged him to burn the body and dispose of the evidence, which caused a fire in the Vilanova family home. The Prosecutor’s Office asks for his acquittal when assessing the defense of psychic alteration, since the boy suffered at that time from an outbreak of paranoid schizophrenia that was diagnosed just after the crime. Alba has assured that Isma had “problems” with her father, but that every time he brought up the subject he would get “nervous and upset” and “never came to specify” what it was about. “Once he said that his father had once punched the wall.” The accused, who claims that he takes anxiolytics and antidepressants, has insinuated that the deceased was a violent man and that he had the impression that he mistreated the boy’s mother, although she has admitted that he has no proof of this.

On June 8, the day of the events, three telephone calls from Isma to Alba appear in the summary. The content of these communications has been lost forever, but according to the Prosecutor’s Office it was at that moment when the accused gave the young man the specific instructions to kill her father. She has denied having received the first two calls, made before the crime – lasting three and eight minutes – but she has not been able to explain why, beyond saying that Arnau had “absolute control” of her mobile phone ” . Alba has admitted the third call, once she committed the murder. “[Isma] He told me that he was finished, that he was covered in blood and that he didn’t know what to do. He said that he had killed him, but he never told me who. He misplaced me a lot that call, ”said Alba, who has rehearsed some repentance in court. “I tried to think why I would have done it, if there was any responsibility of mine for having passed myself off as Júlia… I’m sorry for the damage caused.”

In this Thursday’s session, more elements have emerged about the past and present of Alba’s environment. This Friday the statement is scheduled as a witness for Arnau but also for Adam, his current partner. Several relatives of this boy follow these days with great attention the oral hearing in the Palace of Justice of Barcelona. They want to meet the girl who, they explain, has completely isolated Adam from her environment and is trying to take advantage of him.