Apple has introduced the second generation of the popular Bluetooth headphones, they are still called AirPods Pro. Rumors that the manufacturer would change the design of the headphones have not been confirmed. The new headphones look just like their predecessors. They have a glossy white plastic housing and a short bridge that houses the built-in microphones in addition to the batteries. They are held in the ear with exchangeable silicone inserts, which are included in four sizes and are intended to seal the auditory canal as well as possible. Like its predecessor, the housing is protected against splash water according to IP protection class IPX4.

As usual, the AirPods are operated via pressure sensors in the bars. A touch control function is new, where you wipe over the bars. This should now also be able to change the volume. The wireless connection is via Bluetooth 5.3 instead of the previous 5.0. A revised Apple chip called H2 is used for coupling – the predecessors still use Apple’s H1. The chip allows you to quickly switch between different Apple devices and, as before, issue Siri commands via “Hey Siri” without first pressing a button. Apple has also changed the drivers and amplifiers in the headphones, which should ensure a more detailed and clearer sound.

Like its predecessors, the AirPods Max and AirPods 3, the AirPods Pro support 3D audio with head tracking, which Apple calls Spatial Audio. On an iPhone with iOS 16, the sound can be personalized in the future and adapted to your own listening preferences.

The active noise cancellation (ANC) should also work more precisely, according to Apple the impression is up to twice as quiet. According to Apple, the transparency mode, which is supposed to suppress noise and let speech through into the ear, now works adaptively.

There are innovations in the battery case: It now has small openings on the underside for a built-in speaker. If you have misplaced your AirPods or the battery case, you can use the “Where is?” app to play a sound through the speaker on your iPhone to locate the case. Although this was previously possible via the headphones, especially when they were in the charging case, it was often so quiet that you could hardly hear it. The charging case now also has Apple’s U1 ultra-wideband chip installed, which is already known from the AirTags key finders. This allows lost AirPods to be located more precisely. So that you don’t lose it so quickly, Apple has provided an eyelet for a loop or a carrying strap (lanyard). 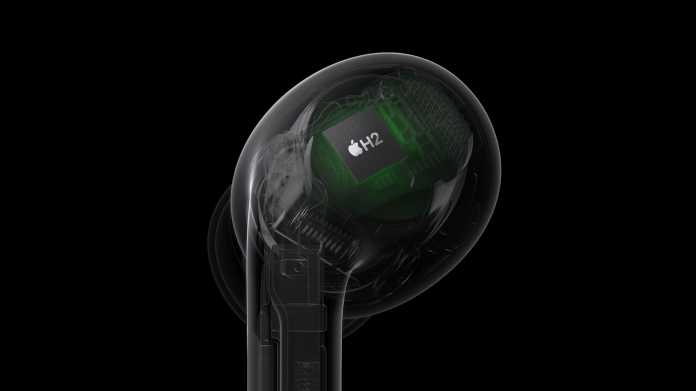 The AirPods Pro 2 are powered by the upgraded H2 CPU.

Apple has extended the runtimes: With one battery charge, you should be able to listen to music with the AirPods Pro for up to six hours, previously it was four and a half hours with or five hours without activated ANC. If you charge the headphones in the charging case in between, you should now get a total of 30 hours, previously it was up to 24.

The earphones continue to charge via the included battery case. As before, they are powered by a Lightning port. The case of the AirPods Pro does not yet offer a USB-C socket, Apple may sell such a charging case later. Alternatively, the case can also be charged inductively, for example via the charging puck of the Apple Watch, the standard Qi or Apple’s magnetic MagSafe adapter for the iPhone. As usual, the headphones come with a USB-C to Lightning cable.