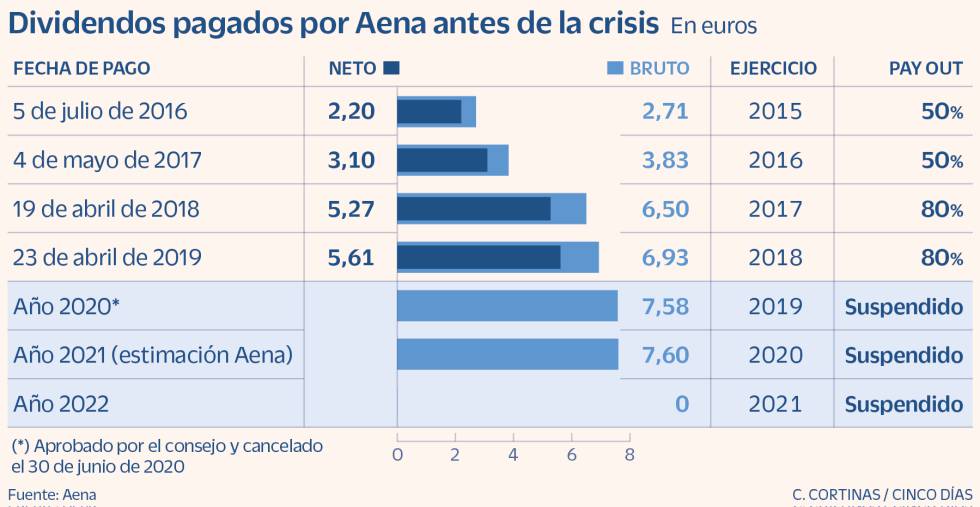 The new strategic plan aena, which will cover the period 2022-2026, is missing the final touches for its presentation between October and November. And important news is expected for shareholders. The company has sent a draft to the Government Delegate Commission for Economic Affairs, according to sources familiar with the process, although it has not yet been examined. It only remains to determine the dividend policyand the intention of the team he leads Maurice Lucenaexplain the same sources, is to resume shareholder remuneration in 2023 with one of the highest payouts on the Ibex after the passage of the pandemic.

The airport manager returned to profits at the end of the second quarter, with 163 million in the accumulated figure for the year, and is now looking to strike a blow that will serve as a lever to boost the price. The bar that looks feasible is repeat the 80% payout prior to the health crisisbut there is even debate behind closed doors to try to improve it up to around 85%. With this, Aena would be placed in the upper band of the Selective by pay out, close to references such as Telefónica, Enagas, MerlinNature, Colonial or Electric Red.

Aena undertook in 2018 with the market to distribute 80% of its individual net profit in that year, in 2019 and 2020. That pay out set during the presidency of Jaime Garcia Legaz It was maintained when Lucena took over the reins of the company, but the outbreak of the pandemic and the consequent collapse of the business curbed any joy. In 2020, 1,137 million euros were expected from a 2019 that was a record in activity and results, but Aena reserved that sum out of caution. The depth of what was going to be the worst crisis experienced by the airline sector was still unknown.

The record payment charged to 2019 was suspended in 2020, in full state of alarm

The Madrid-Barajas and Barcelona-El Prat operator distributed its first dividend in 2016 (charged to 2015), when the payout was 50%. The distribution remained at the same level on benefits in 2017, and grew in 2018 and 2019.

Asked about the objective of an upcoming return to the dividend, the company refers to the clues provided by President Lucena in April, in the framework of the shareholders’ meeting: “We start from a payout of 80% [previo a la pandemia] and it will continue to be high,” he then told a minority.

In principle, the remuneration policy must pass the filter of the board of directors before the final go-ahead is given to the strategic plan. In any case, the return of this payment to shareholders will depend on a positive closing of the current year. The State as the main shareholder, with 51% of the capital, is the first interested in the restoration of the dividend: it collects from a listed public company that invests charged to airfares and not to the General State Budgets.

The roadmap to 2026 coincides in its main lines with the second Airport Regulation Document (DORA), where projects in the airport network and related investments are collected, as well as traffic estimates, operating costs and the rate path applied to airlines. In addition to the dividend, another point pending refinement is that of the international strategy.

Aena operates the London airport of Luton, where he has offered to lead an ambitious expansion; It has stakes in Mexico, Colombia and Jamaica, and owns six seats in Brazil, to which it has added in August a new package of 11 airports headed by the second with the highest volume of travelers in the country, Congonhas, in São Paulo. With this award, the Spanish company becomes the first operator in Brazil, with 17 airports.

The company is reviewing its foreign action after growth in Brazil

This milestone in the South American country would practically cover the growth expectations in the foreign market that Aena had set for itself at the time the plan was drafted. For this reason, it remains to be determined whether the company will endeavor to seek new horizons outside of Spain or will dedicate itself to consolidating its Brazilian asset base.

Celsa’s creditors claim 100% of the capital in court

Andalusian budgets, the moment of truth