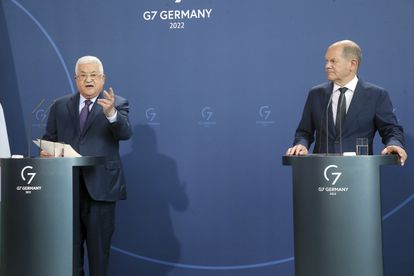 The president of the Palestinian Authority, Mahmoud Abbas (left), at the press conference in which, before Foreign Minister Olaf Scholz, he said that Israel has committed “holocausts” against the Palestinian people, on August 16 in Berlin. Wolfgang Kumm ( P.A.)

The visit to Berlin of the president of the Palestinian Authority, Mahmoud Abbas, has ended in a political scandal. The leader affirmed on Tuesday at a press conference at the Foreign Ministry, and before his host, Olaf Scholz, that Israel has committed “holocausts” against the Palestinian population with its attacks, which has unleashed a barrage of criticism that has also reached the German Chancellor, who did not react immediately to these statements. This Wednesday, while the controversy did not stop growing, Abbas added, without withdrawing what was said, that his words do not imply that he denies the Jewish Holocaust, “the most heinous crime in contemporary history.” Scholz, for his part, has expressed his disgust on the social network Twitter: “For us Germans, in particular, any relativization of the uniqueness of the Holocaust is intolerable and unacceptable. “I am disgusted by the outrageous comments of the Palestinian president, Mahmoud Abbas”, has added.

Meanwhile, the chancellor’s spokesman, Steffen Hebestreit, has charged with the “error” of having abruptly closed the press conference after Abbas’s words, which left the impression that Scholz did not want to give a reply, something that he did not It was true, as he stated this Wednesday. Abbas specifically assured: “Israel has committed 50 massacres in 50 Palestinian places from 1947 to today. 50 massacres, 50 holocausts”. The Palestinian president’s words were in response to a journalist who asked him whether this year, on the 50th anniversary of the attack in Munich against the Israeli Olympic team organized by a group of Palestinian terrorists, he would apologize to Israel. Although upon hearing this, the chancellor, with a petrified look, was noticeably annoyed and made an attempt to reply, his spokeswoman ended the press conference.

Considering the foreign minister’s reaction lukewarm, the political opposition launched into criticism. CDU President Friedrich Merz said on Twitter that the remarks were “an inconceivable fact in the Chancellery.” “The foreign minister should have clearly replied to the Palestinian president and asked him to leave,” he added. The also Christian Democrat politician Armin Laschet, who was the Conservative candidate for chancellor in the last elections, described the words as “the worst aberration ever heard in the Chancellery”.

Israel was also not slow to react. Israeli Prime Minister Yair Lapid called the remarks “shameful” and “an outrageous lie.” And Israel’s ambassador to Germany, Ron Prosor, called them “unacceptable.” “There must be zero tolerance for Holocaust denial by Mahmoud Abbas on German soil,” he wrote on social media Wednesday. For his part, Josef Schuster, president of the Central Council of German Jews, declared: “I find it scandalous that a relativization of the Holocaust, especially in Germany, remains unanswered at a press conference at the Federal Chancellery.”

“The chancellor regrets not having been able to intervene for the second time in said press conference and respond directly to the accusations in another way. Relativizing the Holocaust with its more than six million deaths is completely unacceptable, and doing it on German soil is totally inexcusable”, insisted the spokesman when announcing Scholz’s position on an incident that has “shadowed” relations between Berlin and Ramallah. The German government has demanded that Abbas recognize the “uniqueness” of the Holocaust.

Hebestreit added that the Foreign Ministry has summoned the representative from Ramallah to convey the government’s “indignation” at what happened. And he also announced that Scholz will talk Thursday with Lapid to discuss the incident.

In a statement distributed this Wednesday by the Maan agency, the Palestinian Authority has clarified that “the crimes that the president spoke of are the massacres committed at the hands of Israeli forces against the Palestinian people since the Nakba [la catástrofe, como se refieren en Palestina a la creación del Estado de Israel el 15 de mayo de 1948]”.