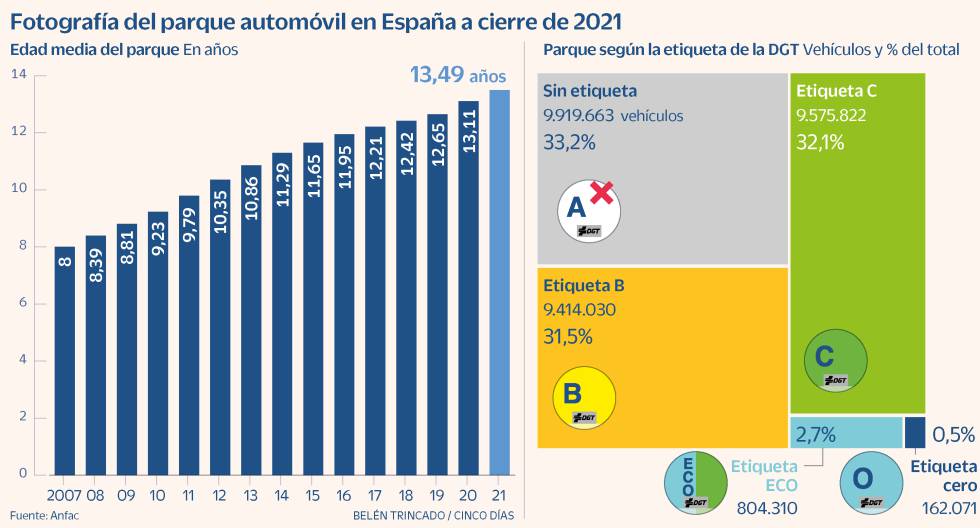 The Spanish car fleet continues to age. According to data from Anfac, the National Association of Automobile and Truck Manufacturers, the average age of cars circulating in Spain at the end of 2021 was 13.5 years, which is two years older than the European average. Total, 29.9 million vehicles circulate on Spanish streets and highways, of which 33.2% (about 9.9 million cars) does not have a DGT label for being too old.

This means that a third of the current park it could not circulate in Madrid from 2025 due to the City Council’s emission regulations. Said rule establishes that vehicles without a label (gasoline cars registered before 2001 and diesel before 2006) will not be able to circulate throughout the municipality as of that year. Today, this type of car already has certain access restrictions, since those who are not registered in the city cannot access the districts that are within the M-30.

In Barcelonathe other municipality in the country that has established a low emission zone (which has been annulled by the Superior Court of Justice of Catalonia, although the City Council and the Government have filed appeals), These cars cannot circulate in this area from Monday to Friday between 7:00 a.m. and 10:00 p.m..

Users of older vehicles that do not have an environmental label from the DGT will suffer more mobility restrictions in other cities from 2023year in which all municipalities with more than 50,000 inhabitants must have a low-emission zoneas established in the Climate Change and Energy Transition Law.

“We need plans to renew the park”, urged the general director of Anfac, José López-Tafall, during the presentation of the association’s annual report this week. According to the manufacturers’ association, the current reduction in park emissions is advancing at a rate of 0.9% per year, quite far from the 3.6% to which it should drop to meet the decarbonization objective in 2030 of the Integrated National Plan for Energy and Climate (PNIEC). “We are reducing the emissions of newly registered cars, but as the fleet is aging, it has a negative effect on us,” López-Tafall explained in an interview with this medium.

Absence of a national Renewal Plan

Currently, there is no Renewal Plan at the national level, although there are regional aid programs such as in Galicia, which ends on September 30, or Cantabria, which ended on May 31. “The renewal can occur with a Renewal Plan, but also with a fiscal change. Positive fiscal measures are needed to promote the electric car”, added López-Tafall. This type of zero-emission cars only represents 0.25% of the current fleet. If plug-in hybrids are added, which also have a zero label, the percentage climbs to 0.55%.