On land, the pollination of plants is a matter of the wind and, especially, of pollinating animals, such as bees or hummingbirds. Under the sea, water was believed to be the only fertilizing vector for plants. However, a group of researchers has just discovered that a small crustacean carries between its legs the male gametes of one red algae to the female gametes of another. This is the first case of animal-mediated fertilization in the world of algae. The finding raises a question for scientists: if red algae appeared millions of years before plants colonized the surface, when did they begin to use animals to ensure their reproduction?

The idotea balthica is a small crustacean that may resemble cockroaches. Although they have been seen in other algae, their preferred habitat is Gracilaria gracilis, one of 6,000 documented species of red algae, which thrives in the calm low-tide waters of the Atlantic. These are living beings that make life difficult for scientists. They live thanks to the fact that they carry out photosynthesis, but they are not plants in the strict sense. Their evolutionary history dates back almost a billion years ago, when they separated from the common trunk from which the plants that would later spread over the earth’s surface would emerge. Gracilaria and the family to which it belongs have a complex reproductive system characterized by a limiting factor: its male gametes (reproductive cell) do not have a flagellum, that is, they lack the tail that, for example, the sperm of mammals use to move in search of the female gamete.

Maire-Laure Guillemin is a professor at the Universidad Austral de Chile and knows a lot about the complex reproduction of the gracilaria. “The female does not release her gametes into the water, she retains it and the male gamete goes to the females, fertilizes her and what the female does is deliver nutrients and energy to this new generation. This egg fertilized on itself, she clones thousands of times and then releases them”, she explains. In the other two large groups of algae, green and brown, their male gametes can move in search of the female ones. “The females of these algae also produce chemicals that attract them, they have a whole series of tricks to attract them. But in the red ones, the male gametes are unable to move on their own”, adds Guillemin. So the gracilaria depends on the movement of water to transport its gametes. 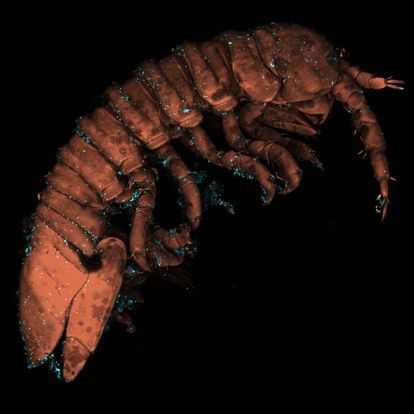 This image shows the distribution of Gracilaria gracilis sperm in the body of an Idotea balthica specimen as seen under a microscope.Sebastien Colin/ ​​Max Planck Institute for Biology/Roscoff Station Biologique, CNRS

What Guillemin and his colleagues from the Universities of Paris and the Catholic University of Santiago have now verified is that these red algae do not depend exclusively on currents for their fertilization. As with flowering plants, they have their own bees to help them. The discovery, just published in Science, was observed in the laboratory. In a series of experiments, they found that in pools where gracilaria and idotheas coexisted, the reproduction ratio of the former was 20 times greater than in the absence of the latter. Observing the crustaceans with an electron microscope, they saw how they carried male gametes attached to their legs until the female algae.

This is a textbook case of mutualism. In this special relationship of symbiosis, the two win and they do it for a greater good: the gracilaria offers shelter and food to the idothea, which eat the microscopic unicellular algae that proliferate on its surface. For their part, the crustaceans clean their hosts and help in their fertilization. The result is a higher chance of survival for both species.

The finding marks the first case of animal-mediated fertilization in the world of algae. But is it something exceptional? “We don’t know,” says the Franco-Chilean researcher. “We have never really searched. No one has searched,” she adds. Discussing it with other scientists, it seemed obvious to them that there was also pollination under the sea, but it was not known. Guillemin recalls that it is not as easy to investigate what happens in the marine environment as it is on land. Also, the male gametes of red algae are invisible.

“And the second problem is that no one had actually done the experiment to date. At the moment, we have one species, but I doubt it’s just one,” he adds. He doubts it because combining water movement with animal transport is an optimal reproductive strategy. In addition, as with the gracilaria, the gametes of other species of red algae generate a kind of adhesive. It was believed that it was to stick to the female ones, but it could well be to do it to the legs of these crustaceans or other animals.

Myriam Valero, head of research at the French CNRS and director of the Franco-Chilean International Laboratory

Myriam Valero is responsible for research at the French CNRS and director of the Franco-Chilean International Laboratory made up of the universities mentioned above. As senior author of the article published in Science, she highlights the relevance of this finding: “Until recently, it was believed that fertilization with the help of animals arose among plants that moved to land 450 million years ago,” she says in a mail. But she, she adds, “red algae arose more than 800 million years ago and their fertilization through animal intermediaries may predate the origin of pollination on land.” There is another possibility pointed out by this expert in biology and ecology of algae: “We cannot rule out that different fertilization mechanisms mediated by animals evolved independently and repeatedly in terrestrial and marine environments.”

This parallel evolution of a good idea (using two or more vectors to achieve fertilization) has its best example in a discovery made in Mexican waters a decade ago. So, researchers from the Institute of Marine Sciences and Limnology of the National Autonomous University of Mexico (UNAM) made a great discovery that almost went unnoticed. In a lagoon in Puerto Morelos, in the Mexican Caribbean, they observed how specimens of various species of crustaceans foraged on the flowers of the Thalassia testudinum. This macroalgae, known as turtle grass, is a true plant that differs from terrestrial ones in that it lives in the sea. The observation, replicated in the laboratory years later, was the first case of marine pollination found until then.

Brigitta van Tussenbroek, director of the team that made the discovery, now assesses what was discovered in the gracilariae. “This is a very exciting finding, as it is the second time that animal-mediated fertilization has been found in the marine environment. The first time was for T. testudinum seagrass beds, a completely different group of macrophytes. Until these studies it was thought that the transport of gametes or pollen was exclusively mediated by water”.

Tussenbroek agrees with the discoverers of fertilization in red algae that, as occurs on land where “many land plants have more than one pollination mechanism, animal-mediated fertilization most likely coincides with pollen transport or male gametes by water currents.