A neighbor affected by the floods in Murcia: “My house turned into a river in a matter of minutes”

The house where Antonio lived, the neighbor of the hamlet of Javalí Viejo (Murcia, 2,300 inhabitants) who died early Monday morning as a result of heavy rains, is reduced to rubble. Much of its walls have collapsed. The water went through the house, on the ground floor, destroying everything, including the life of its occupant, and dragged him about 300 meters. He was 58 years old – not 62, as the City Council initially reported – and lived alone, and his neighbors, 12 hours after the event, shudder thinking that they could have suffered the same fate. This is what happens to his namesake Antonio, who explains with dismay that he keeps thinking about what could have happened to him and his wife if they had not left the doors of their patio and their dining room open, that “in a matter of minutes” , “became a river” around 1:30 a.m. this Sunday. “It was seen and not seen, half an hour that became eternal. We went out on the terrace and that’s what saved our lives, ”he says between sobs.

Once a week he went to the house of the man who drowned his niece, María del Mar, to help him with the housework. The woman learned this Monday morning of the tragic outcome of her uncle, whose body was found by firefighters about 300 meters from her house, when she went to the building. “The water washed everything away. He was taking medication, so I thought he would not have suffered, but they told me that he asked for help and they couldn’t do anything for him,” he told Onda Regional de Murcia.

The municipal mayor of the town, José Francisco Navarro, has also told the media that numerous neighbors heard the man’s cries for help, but the force of the rain and the water that circulated through the streets, which reached, according to the two meters high, made it impossible to save his life.

The house or what remains of it is located on Calle San Nicolás, next to which runs a boulevard that, at that point, curves and narrows. In addition, the road has no exit, and that aggravated the situation. The image when the sun shines with intensity is Dantesque: a quagmire full of piled up belongings and cars, rubble and rubble that the municipal services make an effort to lift and collect. 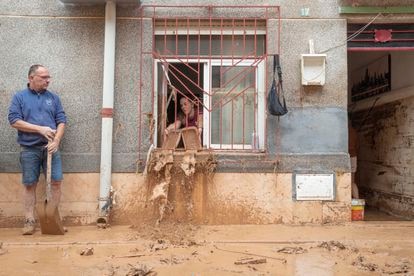 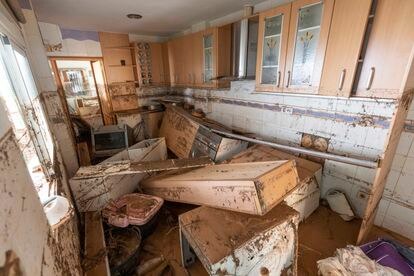 Appearance of the kitchen of a house in Javalí Viejo (Murcia), this Monday. Marcial Guillén (EFE) 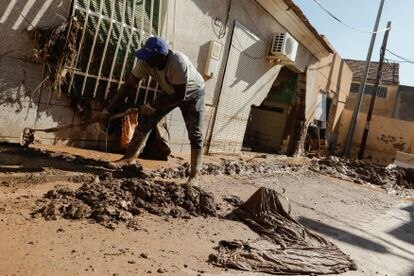 A man clears mud from the sidewalks, after the flood, in the district of Javalí Viejo (Murcia), this Monday. Edu Bottle (Europa Press) 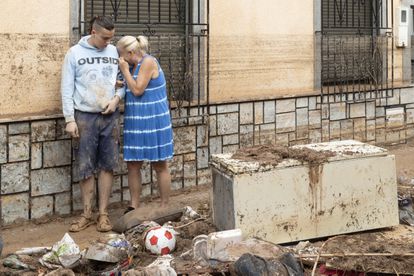 A woman cries in front of the destruction in Javalí Viejo, this Monday. Marcial Guillén (EFE) 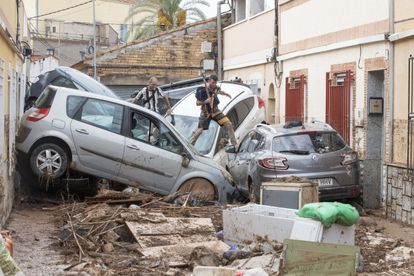 Damage in one of the streets of the Javalí Viejo district, this Monday. Marcial Guillén (EFE) 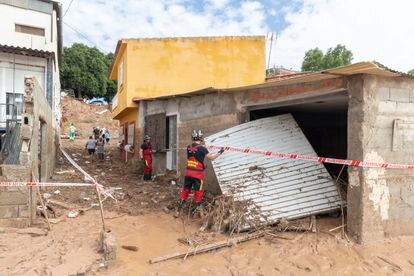 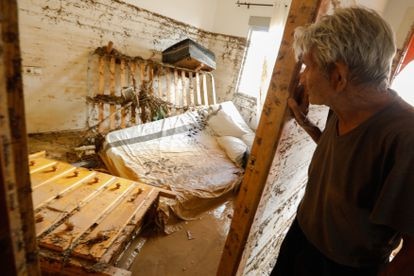 A man looks at the bedroom of his house after the flood, in the district of Javalí Viejo. Edu Bottle (Europa Press) An agent of the Civil Guard before the destruction in Javalí Viejo (Murcia). Marcial Guillén (EFE) 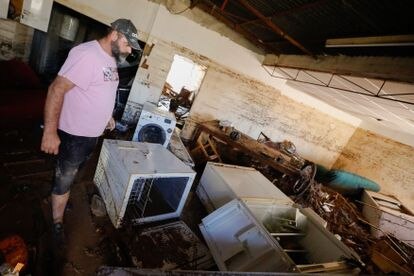 A man looks at his home after the flood, in the district of Javalí Viejo, this Monday. Edu Bottle (Europa Press)

According to the balance of the Mobile Emergency Service and Social Attention of the Murcia City Council (SEMAS), 38 homes have been affected to different degrees, and at least two of them, in a state of ruin; they must be demolished. One of those affected by the floods, María del Carmen, cannot avoid tears when talking about the horror she experienced last night: “The door exploded due to the pressure of the water, the garage was completely filled with water. We went up to the terrace and two seconds later the patio wall fell down. It was two seconds. The firefighters have had to get us out from above, ”she says with a broken voice.

Like her, there are many neighbors who are receiving psychological care from Red Cross volunteers and workers from the Mobile Emergency Service and Social Care (SEMAS) and at least 29 families (81 people in total) have been evicted and transferred to family houses. The City Council has also provided hotel rooms, although only three families have chosen to use them.

One of the evicted is Leyla, who was sleeping with her husband and two children when the episode occurred. “The water came gushing out. We’ve got it all smashed up, it’s all mud. We have absolutely nothing,” she exclaims. She assures that in other episodes of torrential rains some water had entered her patio, but never with this violence.

Isabel has had a similar experience, which shows the marks of water and mud on the walls of her garage, more than a meter high. “Above all, we had tools, machinery, which is no longer useful for anything. A few meters from her house, María also regrets the loss of furniture and her vehicle, which is one of those that are piled up at the end of the street and that until now she used every day to go to work: “It’s a complete disaster” , summarizes.

The coordinator of the Red Cross psychosocial care device, Rosa Celdrán, explains that the unease due to the feeling of having lost everything is now the majority feeling faced by the neighbors, who are still “very dismayed, very anxious” by the moments of absolute panic that they have experienced this morning.

The affected neighborhood is made up of mostly humble homes, and many are beginning to make accounts about how they will get ahead having lost furniture, appliances and vehicles. They do not know when they will be able to return home, which also generates states of nerves and anxiety.

Another neighbor, Josefa, blames these dramatic situations on the poor maintenance of the boulevard, with its narrow curve in the area where the fatal accident occurred. The mayor of Murcia, José Antonio Serrano, has assured that this boulevard had been cleaned only seven days ago and the town’s pedáneo has confirmed that it was in good condition and that over the years it has withstood intense blows, but considers that the one suffered in the early hours of Sunday surpassed any possibility of channeling it. From Podemos, however, they also insist on the need to take strong measures to tackle this type of situation that, he lamented, occurs every autumn without any administration putting “effective solutions on the table”.

From Podemos, however, they also insist on the need to take strong measures to tackle this type of situation that, he lamented, occurs every autumn without any administration putting “effective solutions on the table”.

The councilor has asked that the population be declared a “catastrophic area” so that residents can access aid as soon as possible and thus return to normality.

The City Council has decreed a day of official mourning for this tragic event and all the official acts that were planned for this Tuesday have been cancelled. The material damage, they point out from the consistory, will still take time to be accurately assessed, since to those that occurred in Javalí Viejo are added “numerous incidents” throughout the municipality, from damage to furniture and sports and educational facilities, to falls of branches and trees, and specific cases of power line breaks.

The Mar Menor also suffers the consequences of the storm

Although the worst part of this episode of torrential rains in the Region of Murcia has been borne by the capital, it has not been the only area affected: Campo de Cartagena and the Mar Menor region received more than 100 liters per square meter, news that sets off all the alarms about the already delicate state of the coastal lagoon. The rains have caused important dragging of sediments that have stained the mouth of the main ravines brown. These water contributions remind us of the tragic episode suffered after the DANA of October 2019, which resulted in the massive death of tons of fish. Podemos has drawn attention to these circumstances and to the lack of real initiatives to prevent these episodes from being repeated, despite the fact that three years have passed since then and that episodes of torrential rains are becoming more frequent due to the climate change.