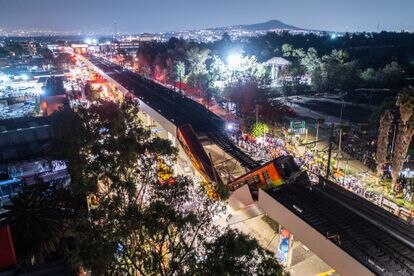 An aerial shot of the collapse zone on Line 12 of the Mexico City metro, on May 3, 2021. Hector Vivas (Getty Images)

The former officials identified by the tragedy of Line 12 will not be able to leave the country or approach the victims and must appear every month to sign in court. Those are the precautionary measures that José Luis Palacios has imposed, the control judge in charge of the case for the collapse in the Mexico City metro in May of last year, in which 26 people died and more than a hundred were injured. Prosecutors sought preventive detention for the accused, but the court has decided that they face the process in freedom after a hearing that began on Thursday afternoon and lasted for almost 20 hours, until early Friday morning.

The control judge is in charge of leading the judicial process from the beginning of the investigations until the opening of the trial. He is the one who determined that 10 people be investigated for the crimes of injury, manslaughter and property damage. Among those prosecuted are former public servants who made decisions about contracting the work of the so-called golden line, as well as workers from companies that were hired to carry out inspections and supervision during construction. Eight of the 10 identified as responsible, mostly officials of the Metro Project, the entity that was created during the Marcelo Ebrard Administration to build Line 12, have already been formally charged. Just reading all the evidence presented by the Prosecutor’s Office to formulate the accusation took about eight hours.

The next key date will be Tuesday, when Palacios is expected to define the legal situation of the accused, if they will be linked to the process and if there are enough elements for the start of the trial. The Constitution provides for a period of between 72 and 144 hours, between three and six days, to decide whether to join the process. In that period, which ends precisely on Tuesday, the defense lawyers can provide evidence to disprove the accusation against their clients.

The legal process on the collapse between the Olivos and San Lorenzo Tezonco stations has advanced at a snail’s pace. The court hearing held on Thursday had been suspended and postponed four times due to different complications and delays. It had been requested by the capital’s Attorney General’s Office since November of last year. Two of the 10 named, for example, could not attend the hearing. One is sick and another changed his lawyer. Therefore, they have not yet been charged. It is expected that the legal situation of these two defendants will be defined on August 17, according to sources close to the case.

“We have the constitutional obligation to seek justice through criminal investigation and the public and complete disclosure of the truth, all aimed at achieving punishment for whoever is responsible and full reparation for the damage,” said Ulises Lara, the spokesman for the Prosecutor’s Office, at a press conference this Friday. Lara has insisted on the commitment that there will be no impunity and that the bottom of the matter will be reached so that such a tragedy does not happen again. Outside the law, nothing. Above the law, nobody ”, the spokesman finished in his message to the media.

Leaving the court, Teófilo Benítez, a lawyer for 13 of the victims, has expressed his dissatisfaction with the precautionary measures and has indicated that stricter precautions were needed to avoid the risk of flight. “The result of the hearing is shameful,” said Benítez. “Among all the crimes, they add up to a minimum sentence of 48 years and the judge authorized some derisory precautionary measures,” he said. “That’s the kind of judges we have in the country,” he concluded. Practically, nine out of ten people affected have accepted the reparation agreements promoted by the Prosecutor’s Office and the Government of Mexico City, which include compensation from Grupo Carso of magnate Carlos Slim, the construction company in charge of the collapsed section, in exchange for not be criminally liable. Those represented by Benítez are the only ones who have not signed. None of the companies that built the line have been held responsible for the collapse.

“The balance is positive in that there was an attachment to the human rights of both the accused and the victims,” ​​said Salvador Herrera, Fernando Amezcua’s lawyer, who is in charge of supervising the civil works of the elevated section. of Line 12. Herrera has indicated that originally the Prosecutor’s Office requested that they appear to sign twice a month, as well as the suspension of their professional practice and the wearing of a locator bracelet. The defense lawyers managed to knock down that request before the judge. “No one likes to be in this type of situation, but my client trusts that his innocence will be proven and that he did his job,” added the lawyer, who stresses that most of the defendants are older adults. .

Gabriel Regino, lawyer for five of the aforementioned former officials, has described the hearing as a “campaign act” by the head of government, Claudia Sheinbaum, and has lamented that “10 innocent people unrelated to the tragedy” are being held accountable. Regino has criticized that the lack of maintenance was not considered one of the causes of the collapse and that the attempt to call Florencia Serranía, director of the subway when the collapse occurred, to testify was stopped. Both Regino and Herrera have recognized that it will be difficult for a different result to be presented to the link to the process next Tuesday.

Enrique Horcasitas, former director of the Metro Project and the highest-ranking official among the defendants, has said that he is “absolutely calm” and has confirmed his innocence. “Line 12 is well built and well designed,” said Horcasitas. “Line 12, since its inception, has been world class”, he has insisted.

The Prosecutor’s Office has defended the expert reports that have been carried out and has commented that “all possible lines of investigation were addressed”, but that the most feasible hypothesis is errors in design and construction. “Our theory of the case is based on irrefutable scientific evidence”, declared Lara.

After being linked to the process, the case enters a complementary or intermediate investigation phase, explains Herrera. It is a six-month period that begins on Tuesday, in which additional elements can be provided by both parties and more testimonies can be incorporated. This period can be extended for several more months at the request of the parties and at the discretion of the judge. The trial itself cannot start until all the pending resources to be resolved, such as appeals and amparos, are exhausted, so Herrera’s forecast is that the judicial process will last for years, even after the end of the administration of the current Government. in 2024.

Junts underestimates the dialogue table: "We do not want to be rescuers of the socialist shipwreck"