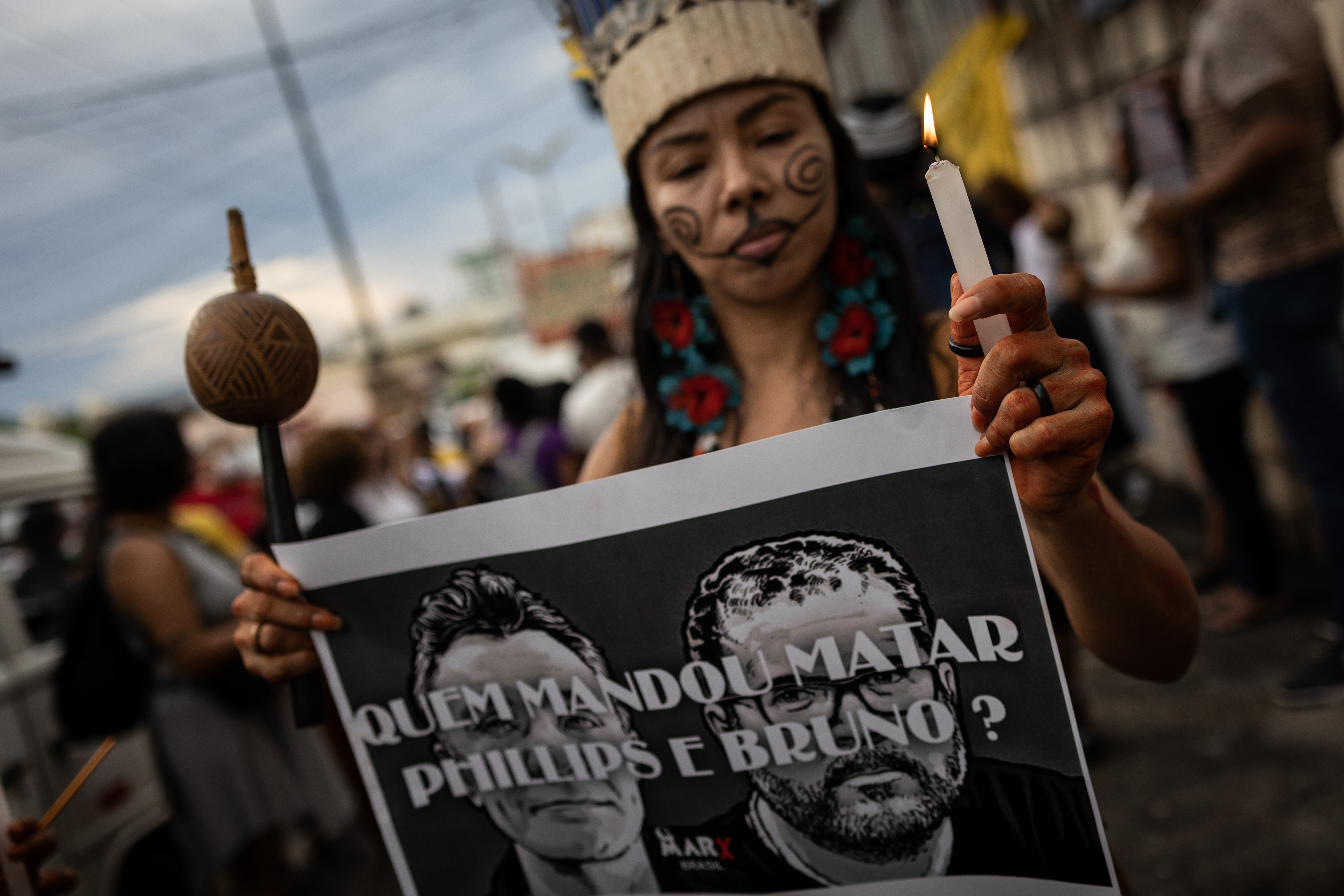 One of the two fishermen brothers arrested for the disappearance of the British journalist Dom Phillips and the Brazilian indigenist Bruno Pereira has confessed to having killed them and took the authorities to the place where they buried the remains, according to federal police detective Eduardo Fontes in a conference press release this Wednesday in which he assured that the authorities are working with Interpol to confirm the identity of the bodies.

The suspects in the case are two fishermen brothers Oseney and Amarildo da Costa, both 41 years old. The latter, who is also known as “Pelado”, was arrested last week accused of possession of weapons after his boat was seen on Sunday chasing that of the indigenista and the reporter when they were near their destination, the city of Northern Watchtower. The second of the brothers was arrested on Tuesday night. This Wednesday, the police took one of the suspects, with his face covered and his head covered by a hood, to the place where Phillips and Pereira disappeared.

The police found the bodies that they suspect are those of the indigenist Bruno Pereira, 41, and the journalist Dom Phillips, 57, who disappeared 11 days ago. Fontes, superintendent of the Amazonas federal police, explained at a press conference that the bodies were buried 3 kilometers inland in the jungle. The two professionals were last seen aboard a boat. The remains will now be analyzed and compared with DNA samples taken from their families.

Pereira and Phillips were seen for the last time on Sunday, June 5, which marked the beginning of agony for their families and relatives, who as days went by lost hope of finding them alive. Those who know the Yavarí Valley region well—one of the most isolated areas in Amazonia—were aware that it is hostile territory and that the chances of survival were rapidly diminishing. Pereira, an expert on indigenous people with extensive experience in the official body created to defend them, Funai, had long been in the crosshairs of the criminal gangs that plunder the riches of the jungle’s ecological reserves.

Amazon veterans cannot recall the murder of any other journalist covering environmental issues in the rainforest, let alone a foreigner. The violent deaths of indigenous leaders and activists are not new, although they do not reach the figures of neighboring Colombia by any means. It’s a trickle, and very rarely are the culprits punished. Impunity reigns. And since Jair Bolsonaro came to power, tensions and violence have increased.

This valley, which is as big as Panama and is better preserved than the rest of the Amazon, is home to ten tribes of uncontacted indigenous people and there are indications that twenty more isolated groups move through it. But its almost intact natural riches make it a coveted booty for all kinds of illicit activities, be it hunting, fishing, wood or mineral extraction.

The journalist and the indigenista were threatened the day before to disappear during a journalistic trip. Together they went by boat to a surveillance base managed by the indigenous grouped in the Univaja association, União dos Povos do Vale de Javari. There, Phillips interviewed the patrollers, who have assumed the defense of their territory in the face of the apathy of the institutions. Pereira was on leave from Funai due to his deep discontent with the directions the organization took after Bolsonaro’s victory. During the visit, some poachers threatened the group by displaying their weapons in the distance. Among them, at least one of those arrested in the case.

Pereira collaborated with Univaja in instructing the indigenous people in the use of technology to document their complaints and thus put pressure on public powers to apply the law and prevent invasions. In addition to the indigenous people, Funai has several surveillance posts in this and other nature reserves, but both the natives’ bases and those of officials working in the Yavarí Valley have come under fire in recent times.

The invasions of fishermen or poachers that have existed for decades. For many locals it was a matter of survival. But in recent years they have multiplied with the entry of money from drug trafficking and thanks to the presidential speech, which has emboldened the criminals, who feel unpunished. In parallel, government agencies for the protection of indigenous peoples and the environment have been weakened by the government with strong budget cuts and the appointment of chiefs from outside these areas, often linked to the military police.

Florentino Pérez: “The Mbappé that was going to come is not the one I found in the end; I prefer him to stay at PSG."