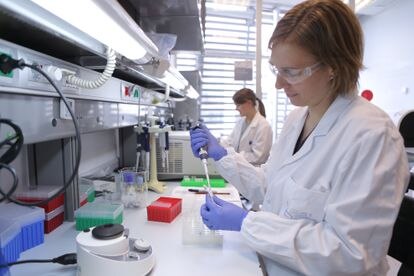 Two researchers work in a laboratory at the Center for Genomic Regulation in Barcelona.CRG

New tools to enhance the efficacy of cancer immunotherapy; the development of an open digital platform to predict the evolution of future cases and waves of the coronavirus; an innovative method to warn about the impacts of climate change through its effects on the soundscape of an ecosystem; the development of a code of ethics that can guide health care in situations of crisis and catastrophes, such as pandemics or natural disasters; the study of the effects that the introduction of price ceilings has on the rental market. This is just a small sample of the issues that the selected projects will address in the 2021 call for Grants for Scientific Research Projects from the BBVA Foundation.

Among the 620 applications presented in the five areas that make up the call (Mathematics, Climate Change and Ecology, Biomedicine, Social Sciences and Philosophy) 35 projects have been selected that provide direct support to a total of 204 researchers, led from distributed centers by nine autonomous communities, including Madrid, Catalonia, Andalusia, Aragon, Asturias, Galicia, Navarra, the Basque Country and Valencia

Supporting knowledge and its dissemination to society is the priority line of action of the BBVA Foundation and has materialized, since 2014, in two recurrent programs; Leonardo Scholarships for Researchers and Grants for Scientific Research Projects. Since their creation eight years ago, both programs have made possible 681 projects in the main fields of science, humanities and cultural creation.

In the field of environmental sciences, four Grants of 125,000 euros have been awarded: “How to increase the resilience of corals to climate change”, by Arnau Sebe Pedrós, from the Department of Systems Biology at the Center for Genomic Regulation ; “Conservation strategies for aquatic insects in the Canary Islands”, by Miguel Cañedo-Argüelles Iglesias, Ramón y Cajal researcher, Institute for Environmental Diagnosis and Water Studies (IDAEA-CISC); “The adaptability of marine species in the face of climate change” by Rocío Pérez Portela, from the Department of Evolutionary Biology, Ecology and Environmental Sciences at the University of Barcelona; and “The impacts of climate change on the soundscape of the Pyrenees”, by José Joaquín Lahoz Monfort, from the Pyrenean Institute of Ecology, CSIC.

In Biomedicine, there are four grants of 150,000 euros, including “Mathematical models to apply the most effective immunotherapy against bladder cancer”, by María del Mar Albà Soler, who belongs to the Biomedical Informatics Program, Hospital del Mar Medical Research Institute or “New therapeutic targets against the most common liver tumor”, by Nabil Djouder, from the Growth Factors, Nutrients and Cancer Group, National Cancer Research Center (CNIO). The Grants will also support five projects endowed with 50,000 euros in Science Social, such as “Socio-family Impact of Rare Childhood Diseases (ISERI)”, by Jon Andoni Duñabeitia Landaburu, from the Faculty of Languages ​​and Education of Nebrija University; “Effects of second-generation price controls on the rental market: the case of Catalonia (PLACAT)”, by José García Montalvo, from the Department of Economics and Business at Pompeu Fabra University; or “Fertility, maternity and High professional demand: military women and high-level sportswomen (MADER)”, by Beatriz Mañas Ramírez, from the Department of Sociology I of the National Distance Education University UNED.