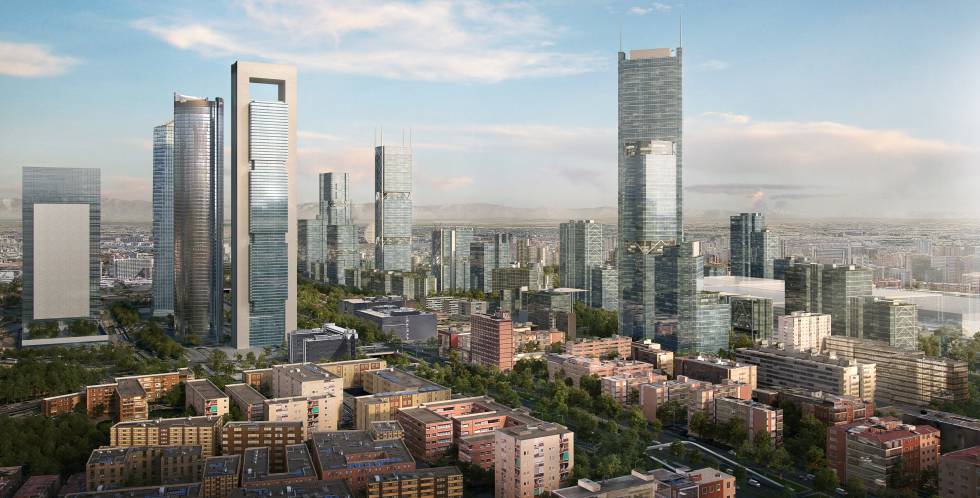 Like in a video game Madrid New North You have to overcome different screens to continue your development. Once the political approval phase has been passed after more than 20 years, it is time to face the judicial turn. Specifically, the Superior Court of Justice of Madrid (TSJM) is going to pass sentence predictably this summer on nine appeals.

The first section of the Contentious-Administrative Chamber has already advanced in the proceedings of these resources and it is expected that it will be able to vote, prepare the ruling and pass judgment in the coming weeks, according to sources familiar with the processes that analyze the previously known as Operation Chamartin.

By terms, the most advanced is the appeal filed by the Urban Debate Club. This organization has the architect Eduardo Mangada, former socialist councilor in the Madrid City Council and former councilor of the Community of Madrid, as honorary president; with Concha Denche, a former IU councilor, as president, and with Félix Arias, a former socialist councilor, as vice president. Sources from this association indicate that they are currently awaiting the ruling.

Another appeal was filed by environmentalists in actiona very active association in appeals against some urban developments, where they also await the ruling in the near future.

The other resources belong to individuals, such as some former politician linked to the Madrid City Council, and to small landowners in Madrid Nuevo Norte, although some of them have presented more than one procedure.

The Contentious-Administrative Chamber has not yet set the day to address the decision. It is unknown if the response to all appeals will be grouped on the same date, but consulted sources indicate that it is likely to be through nine contemporary rulings.

The resources go against the decision of the Community of Madrid chaired by Isabel Diaz Ayuso to grant final approval to the modification of the general plan of Madrid, in a decision of March 2020. After 26 years of political paralysis and economic crises, the project was redone in the previous legislature in which Manuela Carmena (Now Madrid) was the mayor and José Manuel Calvo was a Town Planning delegate. At the beginning of the current legislature, in 2019, the municipal plenary session had unanimously authorized this operation, with the favorable votes of PP, PSOE, Más Madrid, Ciudadanos and Vox.

Although the resources go against the Community of Madrid, the city council headed by José Luis Martínez-Almeida has voluntarily joined as co-defendants, Renfe, Adif (owner of a large part of the railway land affected by this urban area) and North Castellana District (DCN), which is the company with a purchase option on Adif’s land in exchange for 1,245 million euros. This company, in turn, is controlled 74.54% by BBVA, 14.46% by the real estate company Merlin Properties and the rest by Grupo San José. The idea of ​​going together as co-defendants is a way of defending common interests and a project that they consider to be of the State.

“We have full confidence in the legal solidity of the modification of the General Plan, which was processed by the Madrid City Council and approved unanimously by all the municipal groups in the plenary session on July 29, 2019 and subsequently approved definitively on July 25. March 2020 by the Governing Council of the Community of Madrid”, a DCN spokesperson states in writing regarding these resources on which the TSJM must rule. DCN is advised in these procedures by the office Uria Menendez.

In the appeal of the Urban Debate Club, the annulment of the approval of the Government of Díaz Ayuso is requested. The reasons are varied. Among them, the consideration that the plan makes of the land as urban, a decision that comes from the General Plan of 1997. Likewise, it considers the urban use of railway land illegal, in addition to appealing against what they consider less green spaces and protected housing than what that legally corresponds.

In addition, this association disputes that the future slab that should cover part of the railway tracks next to the Chamartín Station can be considered as land to which the green area will be taken. Precisely 10 days ago, DCN and the Madrid City Council presented the so-called Central Park on that slab, whose design will be commissioned by the West 8 studio (the same one in front of Madrid Río).

From Ecologists in Action it is explained that their justified reasons to the court are similar. The association believes that this area cannot be considered solely a one-off modification. It also rejects the designation of urban land, since this future neighborhood does not have infrastructure such as streets and sanitation. Likewise, they highlight the decision to cede the green areas on the concrete slab, “on a fictitious land”, which gives more buildability for “greater benefit of the developer against the public interest”, indicates a spokeswoman.

Business sources involved in the project reject the demands indicating that, for example, the fact of considering that land as urban is from 1997 and that now there is no recourse on this issue, in addition to rejecting that green areas cannot be located on the slab. In fact, they point out as strengths of the development that it has been designed in detail during the last two decades; that it is on land within the urban fabric; that Carmena has already cut the buildability, and that it has received the unanimous support of the municipal groups and the Administrations.

Against the resolution of the TSJM, the losing party may file an appeal in the Supreme Court or in the Madrid court itself if it understands that regional regulations are violated.

Madrid Nuevo Norte is the largest urban project in Spain. Its objective is to close the railway gap to the north of the city, next to the Chamartín Station. The action includes 2.3 million m2 of land, a building area of ​​1.04 million residential m2 (for 10,500 homes) and 1.6 million tertiary, on which the future city offices are planned.

The project will draw an investment of 25,197 million euros and will generate 350,000 jobs, according to data from the Autonomous University of Madrid. Of that figure, 14,128 million correspond to the purchase of real estate, in construction it reaches 4,023 million and in infrastructure paid for by private capital it reaches 1,468 million

Marilynn Malerba, the chief of the Mohegan Indian tribe who will sign the new banknotes in the United States

The new tunnel between Chamartín and Atocha will open on July 1, but without practical effects for the AVE traveler