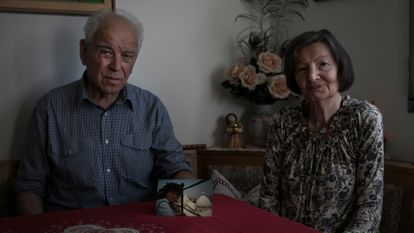 Hermann and Karolina, Evi’s parents, last May, at their home in Lana.MASSIMILIANO MINOCRI (EL PAÍS)

The Italian Prosecutor’s Office is investigating the death of Evi Anna Rauter, the 19-year-old girl found dead in Portbou 32 years ago. For her family, she was formally missing; for the Spanish authorities she was an anonymous corpse. Thanks to the work of the TV-3 program Crims, the body was finally identified on April 23, three decades later. In the second episode about the young woman from Portbou, broadcast this Monday, the program has revealed that her sister, Cristina, has declared before the Italian authorities. In Spain, the death was filed as a suicide and, in any case, even if evidence was found that someone killed the young woman, the crime has already prescribed.

A young man found Evi dead, hanging from a pine tree, in Portbou on September 4, 1990. Her case was an unsolved mystery, to which local journalists and even novelists devoted years of attention. Who was this dead child that no one claimed? Meanwhile, in Italy, Hermann and Karolina, Evi’s parents, and her sister Cristina, papered over the cities where she could have passed in search of the 19-year-old girl. I was spending a few days with her sister in Florence, they said goodbye to her on the morning of September 3, Evi said she was going to visit Siena, and they never heard from her again. They did not know it, but she had been found hanged 1,000 kilometers away, 23 hours later.

Crims’ interest in the young woman hanged in Portbou led them to contact an Austrian cold-case outlet, Ungelöst. They suspected that the girl was from that country. They broadcast a special about the young woman, with close-up photos of the autopsy, and a neighbor from the Italian area of ​​Bolzano, in South Tyrol, bordering Austria, recognized Evi from the posters that the family spread when she disappeared. Evi was from Lana, in Italy, a municipality very close to Bolzano, the capital of the area.

When she was found dead in Portbou, coroner Rogelio Lacaci ruled that she had committed suicide. Three decades later, the retired coroner, who admits she never attended the scene of the alleged hanging, thinks otherwise. He analyzed the body directly in the autopsy room. Seeing the photographs of the scene of the hanging, he considers that it could not have been a suicide in any way: the rope was very short, there were no signs on his body of having climbed the tree, he was facing the pine… He considers that at least Two people were involved in his death. Now the Italian police, where serious cases do not prescribe, have asked Crims for the video with Lacaci’s testimony. Six months have been given to move forward or file the case.

In addition, the program has interviewed a neighbor who lived 20 meters from the pine tree where the young woman was found dead in Portbou. The woman, who is now 92 years old, assures that on the morning of September 4 she slept badly because she heard a group of young people “screaming”, who were “fighting”. And among them, she heard “a girl crying.” “They woke me up from the screams they hit and a girl who screamed and cried,” she explained. The woman told her family and her neighbors, but no one else. The Civil Guard, which continues to maintain that the young woman committed suicide, never asked the neighbors if they had heard anything.

The TV-3 program suspected that Evi was Austrian because the night she died a group of young people from that country were camped in Portbou, 50 meters from where she was found hanged. Of the six young people (five men and one woman), Crims has managed to contact one, of whom they assure that he was elusive. There is no trace of the rest on social networks. Not since the Austrian program Ungelöst have they been able to locate them.

For the family and the investigators, informally, there is no doubt that the young woman from Portbou is Evi Anna Rauter. The photographs are eloquent: she has the same mole that Evi had, her hair, her features. They are close-ups. In addition, the clothes he was wearing (jean overalls, a turquoise shirt, and sneakers) are the same as the day he disappeared, as stated in the complaint filed by the family in 1990. For his parents, another key detail bras, a particular brand that had been bought for her at a store in Lana. The official identification by the court that once investigated the finding of a 19-year-old girl found hanged in Portbou is still pending.

Social Security gains 72,111 foreign affiliates in May and marks a historical maximum