A new version of Cinnamon, the standard desktop environment for Linux Mint, was released a few days ago. One of the most important innovations of Cinnamon 5.4 is the migration of the Windows manager Muffin to a newer code base from mother from the Gnome project. The JavaScript interpreter CJS, a Cinnamon fork of the Gnome Javascript Bindings (GJS), also gets a refresh.

In addition, there are a number of smaller adjustments: The developers simplify the setup for active corners (“hot corners”). The terminal gets a resize popup and the “Show Desktop” applet is improved. In addition, the Cinnamon developers are working on multi-monitor support. The primary monitor is no longer automatically monitor “0”. The xrandr applet now uses the muffin API. System information can now be easily copied to the clipboard.

Cinnamon 5.4 is already available in the Arch Linux repository. Linux Mint users will get Cinnamon 5.4 regularly when upgrading to Linux Mint 21 “Vanessa”, which is expected in the summer.

Desktops and distributions for every taste

The Cinnamon desktop was created as a fork of Gnome 3 and is based on a classic operating concept. Cinnamon is just one of a number of desktop environments available for Linux Mint and many other distributions. 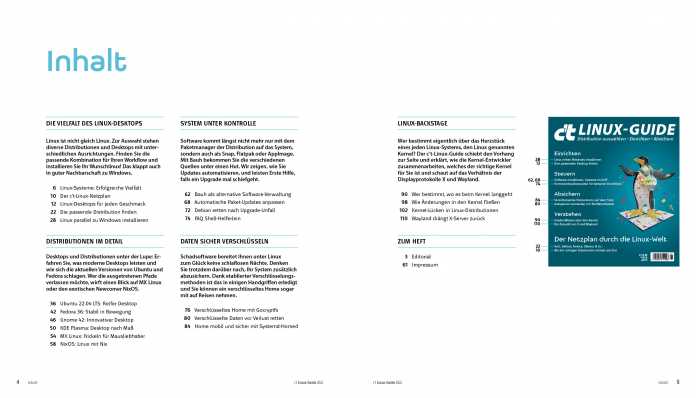 The special issue c’t Linux-Guide supports you in the choice of desktop and distribution, gives tips for setting up and securing the system and reveals command line tricks that have proven themselves in the editorial office. Background articles deal with the development of the most important component of Linux systems, the Linux kernel.

In the c’t Linux Guide special, which is now available, c’t guides you through the diverse world of Linux and helps you to find the combination of desktop and distribution that suits you. We also show you how to keep your system under control, encrypt private data and explain how the development of the Linux kernel works.

c’t Linux Guide is available both on paper and in digital form. If you order the print edition for 14.90 euros in the heise shop up to and including June 28, 2022, you do not pay any shipping costs.

The digital edition is now available as a PDF for EUR 12.99 from the heise shop; the special issue is also available in our Android and iOS apps as well as on Amazon.

You can also find the printed booklet and the digital edition as a bundle for EUR 19.90 in the heise shop, or as a super bundle consisting of booklet, PDF and c’t Linux network plan for EUR 24.80 (34% discount).

Social Security gains 72,111 foreign affiliates in May and marks a historical maximum

How to write yegar or arrive