Women know it, men suspect it: Men do the most mischief because of a woman. There is no other way I can explain why I rode my first motorcycle from Wuppertal to Sigmaringen almost every weekend for several years. 500 kilometers there, 500 kilometers back. My childhood sweetheart had moved from the suspension railway city to the upper Danube to study. My single-cylinder Honda XBR 500 suffered as a result, struggling with a meager 27 hp on the freeway. I had mounted a larger sprocket to tease out a little more top speed. A flimsy half shell should take the wind pressure and the cold, heated grips should stand up to the frosty winter days. What I didn’t do was look around off the freeways on all these trips. Ironically, in Baden-Württemberg, a Moto Dorado par excellence. But you can catch up on that, right?

Years later: A pale veil of pale light blue lies where I suspect Lake Constance. The peaks of the Swiss Alps push through the veil in the morning light, and only slowly does Germany’s largest lake appear as a shimmering line. Why am I not standing right on the shore? I’m in a better place: on the Gehrenberg Tower. Eight kilometers as the crow flies from Lake Constance and the hustle and bustle of traffic on the shore roads, I’m as alone on the 30-meter-high tower as Sandra Bullock in “Gravity”. Will it stay that way?

The Lake Constance region exudes so much flair that my thirst for adventure is fed by the side dishes of the colorful orchards, wide fields and charming villages. But where are the T-bone steaks? South of Bonndorf, in the Schlücht and Schwarza gorges, the country shakes off its conservativeness. Dark, craggy rock faces, which you don’t want to get too close to, shimmer past on the right. On the other hand, instead of crash barriers, boulders are placed on end to prevent falls into the valley floor. A bold little road squeezes between rock and chunks, which even lacks the otherwise obligatory German marker posts. Is this still Germany at all? You would think France or Italy capable of such an adventurous route. But the country? I’m amazed for the first time, but not for the last time.

In general: This change from contemplative to astonishing! I’ve just treated myself to a break in the picture-postcard idyll of Laufenburg, when the southern Black Forest is already spraying its attractants. And by that I don’t mean the much-vaunted B 500. Too big, too much traffic. No, from Pfaffenberg to the Hochblauen, that’s where my heart melts. First, the two-cylinder whizzes above the Wiesental on a course that is suspicious of a panorama and then descends into the valley of the Köhlgartenwiese. What sounds like grass is actually a modest creek, but the road that follows it soars up to a highlight. I swing behind. Almost with too much momentum and almost miss it. At least I didn’t expect the sudden branch that drifts even further to the left in a Carrerabahn left-hand bend towards the high blue. Sharp pressure on the brake lever, the brake fluid presses on the pistons, the pads bite into the brake disc. A slight whistle between the tires and asphalt announces maximum deceleration. Just in time.

A transmission mast, a lookout tower and a mountain farm with parking. The facts are sober, the prospect is intoxicating. On a good day you should be able to see the Alps from Säntis to Mont Blanc. Today is a good day and I see the ridge of the Alps. But which of the powder tips is Säntis and which is Mont Blanc? And why wasn’t I here earlier? The hormones probably prevented it a long time ago. And what about now? But there must still be a hormone somewhere, because I look at my watch and briefly estimate the distance to Brend near Furtwangen. Around 100 kilometers. On small streets? I have to hurry there. There are people you don’t want to keep waiting. Especially if they bring something important.

Even if I’m in a hurry, I can’t resist the Münstertal and the Schauinsland. Now, on a normal weekday, it’s almost as quiet on Freiburg’s local mountain as it is on Robinson’s island. That changes in Kirchzarten, where the evening rush hour traffic breaks through on the west-east axis. I keep going north to Spirzenstraße. Shortly before the high point, a quick glance in the rear-view mirror must suffice for the panorama. Should I now switch to the B 500? That would save me a few minutes. Oh nonsense, I’m almost there. And the few minutes won’t tear it out either. So off to the witch hole!

No, you can’t gain time on the five kilometers through the narrow witch’s hole. But atmosphere! Hardly any daylight penetrates the valley, where you even have to avoid an oncoming tractor. The Heubach gurgles over dark rocks and I’m glad that it’s not quite so dark when I leave the witch’s hole near Neukirch behind me. Because the sunset is planned for the brand. Twelve kilometers to go. Can I do it in time? 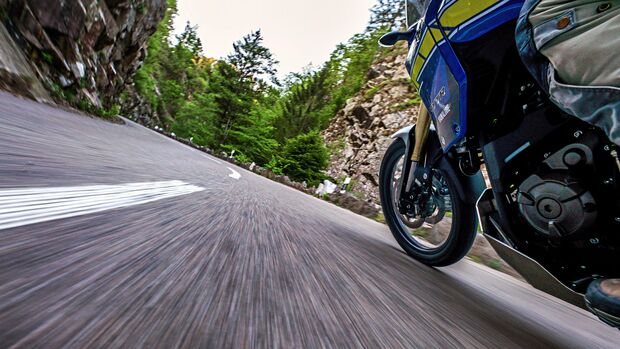 The sun blinks only mildly through the rows of trees. The Ténéré pushes hard again on the last few meters to the meeting point on the Brend. The Yamaha crunches into the parking lot in front of the Brendturm and I pull up next to a white BMW HP2. So Diana is already here and has brought the motorcycle that accompanied me on several stages of the Germany marathon. But where is she?

A small footpath leads to a sloping meadow. The last rays of sun polish the sky and touch a wooden lounger. Spicy cheese, plump tomatoes, olives and blueberry wine are draped on it. With two bottles of beer in hand and a smile on her face, Diana approaches me. There are people who shouldn’t be kept waiting.

You can try. But once you’re in the Black Forest, you won’t get rid of it that quickly. With the new morning we drift over Oberprechtal and its brilliant mountain route to Schiltach and Alpirsbach. And there she is again. This comfort that wants to prevent you from continuing. Picturesque half-timbered houses, where the centuries are written in the beams. Rumbled cobblestones that voluntarily let the speed drop to idle level. You have to imagine really bad weather to avoid thinking about staying here longer than just for an ice cream sundae.

It is almost a blessing to exchange the forest first for the Alb and then for the Hohenlohe plain. The spectacle of curves fade away, extensive country roads send the clutch hand into a temporary retirement. The view extends further than just to the next valley wall or the next tree trunk. Or just up to the next wooden wall? What kind of picket fence is that?

In Lorch we have just crossed the Rems when the road leads up to Alfdorf through a Roman fort. Well, castel would be an exaggeration, and it’s only a replica. But all of a sudden this aroma of the surprising, the unexpected spreads again. A feeling that has been preserved over the entire Germany marathon, through all federal states. Actually, surprises are no longer quite up-to-date. Planning, booking in advance and having expectations met are the sizes of now. But this joyful excitement, the amazement and the happiness of having discovered something for yourself are probably in another area, it occurs to me as we finally hum through the Odenwald.

What actually became of childhood love? At some point her studies were over, she moved back towards the suspension railway. And nothing would have stood in the way of a happy life together. If not… you guessed it. attractants. For the sake of completeness, it should be noted that the XBR has never let me down.